Hello there! While I’m waiting for my DSLR camera to come in today (!!!), I thought I’d share my latest fitness adventure.

You may recall I recently purchased a bike after a somewhat lengthy period of inactivity on two wheels. I had some good rides around my neighborhood, up to 5 miles, but still wasn’t really sure I was ready to commute to work downtown. It looked simple enough on the map – only a bit over 7.1 miles, and fairly flat, most of it on the San Diego Harbor bike trail, uninterrupted by cars. I’d never really explored the route before so I just put the downtown ride on the back burner.

Well, through a series of coincidences, I ended up canceling my parking permit where I work. For the time being, I have to pay for daily parking or find some other way to get back and forth to downtown. Like I always say, there’s nothing like self-pressure to really get yourself going places. So I picked a cool Wednesday to get up a bit earlier, try for the big ride, and basically hope to God I wouldn’t crap out and find myself stranded – especially on the voyage back home afterward.

The commute to work took a little longer than I expected (50 minutes compared to Google Maps’ projection of 40), and I really got to know all the hills in my neighborhood intimately. Luckily I have started to get some climbing skills on the bike to push myself over those bumps and maximize my speed and efficiency. I also had to take a few detours to account for an event of some kind that set up a bunch of fences along the waterfront, blocking the bike path. Google Maps bike navigation is definitely helpful when you’re just starting to learn the geography.

On the way home, I was concerned about overexerting myself, so I decided to take it slow. It was nice and cool with a little mist in the air, and I stopped along the downtown waterfront to get some cool and eerie shots. 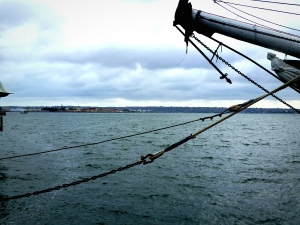 By the time I made it to the airport, I was less than halfway home and already fatigued, but still feeling okay. Unfortunately I also learned that it is really hard to ride a bike through all of the airport interchanges – one of those places where the bike lane kind of just disappears into the middle of the road, no sidewalk, and the speed limit for cars is 40 or above. Really? Step it up, City of San Diego.

Once I made it through that tangled mess of concrete, I walked my way to the crest of the bridge and had a nice ride down into Point Loma, where I only had one more main boulevard to ride on for a couple miles before arriving at home. It started to sprinkle but I didn’t care. I was exhausted and exhilarated at the same time, knowing I’d soon be warm, comfy, and most importantly, immobile, with a new accomplishment under my belt.

Overall, I rode 14.2 miles! And only had to “walk it off” 2 or 3 times during the ride home when things got hilly. I’m surprisingly not super sore today, because I stretched and got a nice boyfriend massage ❤❤ but I will have to get used to the bruised feeling from the seat

Commuting to work via bike was a valuable experience that showed me I can do a lot more than I sometimes give myself credit for, is offering me a great option for cross-training for my half marathon, and could potentially save me some money on gas this year. If you have a bike I encourage you to ride it outside your comfort zone this weekend and feel the fresh air breezing by!

The epic saga will continue at least one other time, next Friday May 15 for San Diego Bike to Work Day!

One thought on “I Survived My First Urban Bike Commute”